ARE HAIRBALLS HARMLESS TO CATS AND HOW DO I PREVENT THEM

Especially in long-haired cats swallow hair during the grooming process and develop hairballs. But even short-haired cats sometimes vomit hair. This is normal to a certain extent, but can also cause problems.

Every cat owner knows about it: the cat occasionally vomits elongated hairballs. The excretion of such hairballs is unattractive, but not serious in healthy cats, as long as vomiting does not occur too frequently. It is not pleasant for the cat, however - the cat becomes "ill", and the violent nausea, which precedes the eruption, manifests itself in miserable meowing. Therefore, we should help cats get rid of their hair in the normal way. At the same time, the amount of hair picked up can and should be reduced by regular coat care.

In cats with health problems such as hypertrophic cardiomyopathy (HCM), hypertension (hypertension) and cats with chronic renal insufficiency (CNI), however, hairballs have a very different relevance. The vomiting is stressful and therefore very circulatory, and since the heart is usually no longer able to bear normal stress due to hyperthyroidism (thyroid hyper function), HCM or hypertension, violent vomiting and the like can have dramatic consequences.

Cats suffering from CRI (chronic renal insufficiency) have frequent problems with the mucous membranes (mucous membranes, esophagus, gastrointestinal mucosa) as a result of the lack of excretion of toxins by the kidneys. During the vomiting of hairballs, gastric acid passes into the esophagus, the throat, and the mouth. And because cats suffering from renal disease often suffer from nausea, everything that could potentially lead to sickness and vomiting is to be avoided.

But also in the case of an excretion of hair and hair balls in the normal way over the intestine, problems may occur, especially in long-haired cats. In the simplest cases, such hairballs lead only to a slight blockage. However, the hairballs which are called bezoars in medical terms can also remain in the intestines and block it in such a way that a dangerous intestinal obstruction (ileus) occurs. Particularly at risk in this respect are Maine Coon cats, but generally, all cat breeds can be affected. An ileus (intestinal obstruction) is always life-threatening; emergency surgery is necessary to save the life of the cat. Signs of such an intestinal blockage are repeated, unsuccessful choking and vomiting, weakness and lethargy, sometimes also watery diarrhea.
Sometimes such hairballs can also cause a very stubborn blockage in the colon region. In humans, a laxative or possibly an "enema" helps for such a blockage. These two rather drastic measures are not recommended, since they are dangerous to the cat. For this reason, in the case of the cat in individual cases even surgery to remedy the constipation may be necessary. For this reason, it is best not to let it go this far, especially since the large intestine of the cat can be so overstretched (the so-called Megacolon) by prolonged constipation, that constipation keeps occurring shortly after successfully remedying it.

How can cat owners prevent this? First of all, regular, if possible daily grooming should be on the agenda not only for long-haired cats. The best thing to do is to get them used to brushing and combing as kittens. For long-haired cats, fur care should be attended to daily so as not to become matted. If it hurts too much, even the nicest cat will develop an aversion to brushing or combing. If mats are already present, only one thing can be down: clip the matts, preferably with a special small, especially low-noise shearing machine.

Many cat owners give their cats cat grass or a cat paste for the prevention of hair balls regularly, in particular owners of long-haired cats, which have usually alred been warned about the problem by the breeder of their kitten. The "classic" remedy against hairballs is malt, which is usually offered in the form of a cat paste. Cat grass is also used for the prevention of hairballs.

However, there are other, particularly effective ways, such as novel pastes containing a combination of malt, elm bark and grass.

Elm bark - or more precisely the bark of the North American rotulum ("Slippery Elm Bark") - has been used as a remedy by primitive races for thousands of years. Native Americans used it for gastric disturbances and digestive problems. Scientific studies (Kerry L. Duffy, Catriona J. Giffard: A Potential Nutritional Prophylactic for the Reduction of Feline Hairball Symptoms) prove that elm bark positively affects the transport of swallowed hair in the body of cats. Elm bark stimulates mucus formation in the digestive tract. This prevents swallowed hair from becoming matted, the hair can pass through the intestines much easier. If, in spite of everything, swallowed hair is not immediately excreted, elm bark also has an anti-inflammatory and soothing effect on the mucous membranes. This is especially important for cats with CRI (see above) or chronic inflammatory diseases. In combination with grass, elm bark is particularly useful. The grass fibers bind the swallowed hair in the stomach. Together with the mucus of the elm bark, the hair becomes very slippery, which means that it can be easily moved through the intestine and excreted in a natural manner.

Conclusion: For every cat, and especially long-haired cats, hair ball development should be prevented. Regular grooming, cat grass and special pastes with malt, grass and elm bark can prevent the problems associated with hair balls in cats. 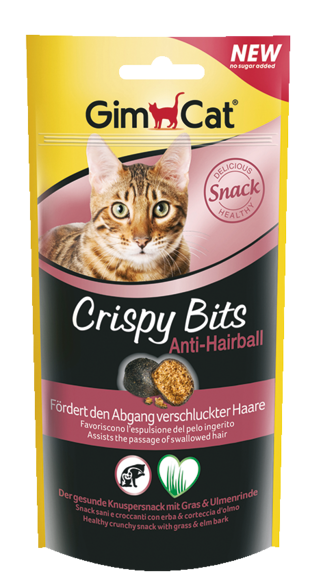 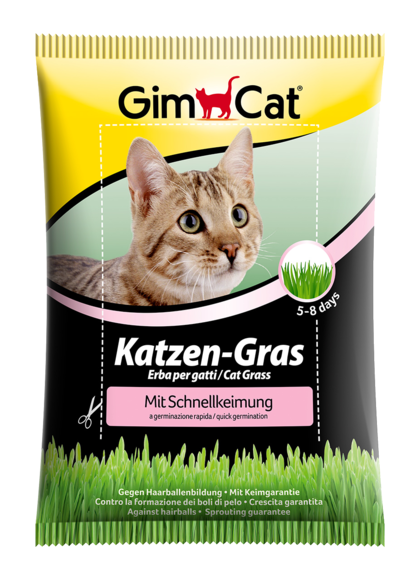 Cats need cat grass to regurgitate indigestible feed matters, like hairballs, bone particles, etc., from their stomachs. Instructions for use: 1. ...